The Mountain Pine Beetle: What Lumber Companies Need to Know

How Mountain Pine Beetles Cause Trees to Die

Pine beetles live, feed, and grow under the bark of their victims. Generally, females seek out large-diameter, living, green trees and tunnel under its bark. Each beetle pair forms a vertical tunnel in which to mate and produce approximately 75 eggs. Once hatched, larvae tunnel away from the egg gallery and feed off the nutrients and moisture of the tree which cuts off the trees food and water supply subsequently starving, drying, and killing the tree [iii]

The beetle’s larvae survive winter under the tree bark by metabolizing glycerol, an alcohol which serves as antifreeze. The larvae continue feeding until they emerge in spring when they mature into pupae. By summer, the pine beetle life cycle begins anew with an expanded family. They leave dead pine behind called “stags” with blue-gray sapwood [iv].

The mountain pine beetle has already left a historic legacy in the British Columbian (BC) forest and it is making its way into areas of the United States as well. In a 1963 edition of Great Basin Naturalist, S.L. Wood described the BC mountain pine beetle as “the most destructive insect of mature pine forests in western North America [i]. Decades later, BC’s lumber industry deals with over 42 million acres worth of dead pine eaten by Dendroctonus ponderosae.

The infamous beetle has infested much of British Columbia’s lodgepole pine, and it is killing millions of trees. And while normally, environmental conditions naturally inhibit the spread of Dendroctonus ponderosae, warming trends over the past 15 years have not provided the temperature shifts that would naturally control its population. 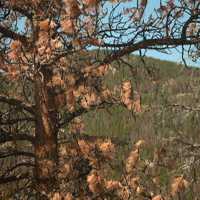 As of April 2011, the Government of British Columbia estimates that the mountain pine beetle has consumed 17.5 million hectares (43.2 million acres) of provincial forest [v].

“It’s basically the challenge of responding to the mountain pine beetle,” said John Allen, President of the Council of Forest Industries, which represents more than 50 BC sawmills [vi]. Allen explains that beetle-infested lumber is much drier and more brittle to process. While it still represents useable lumber to environmentally-minded producers, the risks need to be accurately assessed as well.

If pinewood remains of such vast quantities represent a milling opportunity, lumber professionals are most challenged to adjust their processing to accommodate for the barren moisture content of dead pine.

To Mill or Not 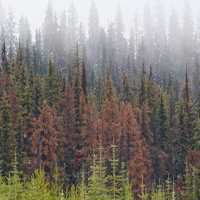 Although dangerous, BC sawmills are attempting to process the remnants of beetle-infested wood. Why? Economically, there is too much of it to ignore. Environmentally, BC government officials want to clean up the central interior of the province in order to replant for future generations.

In an unprecedented move, the British Columbia government ordered Worksafe BC (its health and safety agency) to investigate all BC sawmills in the wake of three worker fatalities early in 2012. Pine beetle wood arrives with very low moisture content (MC) levels and its highly combustible sawdust is a factor in the sawmill explosions that prompted the investigation. 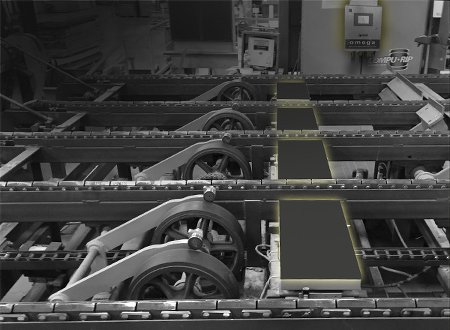 How Lumber Companies Can Lower Their Risks of Processing

Sorting Out Lumber in the Sawmill

Lumber operators can adjust sawmill moisture/density sorting systems to accommodate for pine beetle-infested wood. Automatic scanners can distinguish the dangerously dry wood through measuring moisture content in the wood as it runs through the mill’s conveyor systems. The Omega In-line System can identify the low MC levels of pine beetle-killed wood for removal from the kiln process where applicable.

Ironically, BC’s exploding sawmill dilemma is a thumbnail portrait of an industry facing change on two fronts. As lumber operators increasingly face the process of damaged wood, mill processing itself must adjust.

“The game has changed,” says Wayne Winkler, biomass engineer of Briquetting Systems. “Now the magic word is dust. It’s not wet sawdust anymore, it’s dust coming from the beetle-killed wood. The dust has lost most of its moisture because it has been dead for years. It is very flammable [ii].

The government has ordered mills to clean up latent sawdust. Winkler believes the measure will be insufficient, but he suggests that lumber operators take a comprehensive, system-wide approach to beetle-infested pine wood processing.

“Fortunately, this problem has been recognized for a long time,” says Wayne Winkler, “…and there is technology to deal with it. The equipment is manufactured in Denmark and has been used around the world for many years [iii].”

Waste sawdust is sucked up at collection points throughout a processing plant. Then, it is compacted into revenue-producing products, such as fuel pucks and fireplace logs. However, these are plant-wide systems which can cost several million dollars.

Denmark has deployed waste incineration for a century. Initially, the nation engaged the process to reduce landfill. However, Denmark incinerates its waste for energy purposes. Today, companies that incinerate waste from their own areas receive preferential rights to sell the resulting energy [iv].

The Future Impact of the Mountain Pine Beetle

Why does this matter today for US producers? 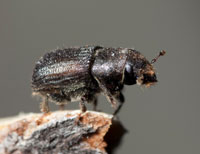 Researchers at the University of Northern BC (UNBC) explain that new adult beetles emerge from under pine bark and fly when average highs reach 20 degrees (C.; 68 degrees F.) over three days. In BC, peak flight time occurs in the last half of July each year [v]. Convection, a common fair-weather occurrence during that time in BC, “…may carry some beetles above the forest canopy to be passively transported over long distances by the mean wind within the atmospheric boundary layer [vi]. In fact, local pilots anecdotally reported mountain pine beetle sightings at 1500m (4921 feet) above the BC forest [vii].

The future role of the mountain pine beetle in modern forestry is articulated in UNBC’s research conclusion:

“…the results of the aerial capture and radar analysis…both support the theory that mountain pine beetles can undergo long-range transport aided by the wind within the planetary boundary layer [viii].”

With the extent of the infestation and the amount of pine-beetle affected pinewood lumber being processed, monitoring the quality and dryness of the wood is even more critical to sawmill safety.

“What is the Mountain Pine Beetle? A Primer for Teachers & Students” Parks Canada: The Government of Canada.

COVID-19 Announcement: Wagner Meters is not expecting disruptions in our ability to continue to serve and support our customers during this time. We are closely monitoring the situation as it unfolds to maintain our employee’s health and meet the needs of our customers. We are thinking and praying for all of those affected.
+