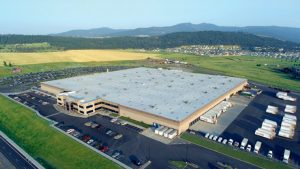 In Liberty Lake, Washington, the largest privately-owned cabinet maker in the West occupies a 567,000 sq. ft. facility. But it’s taken over two decades to reach that point, as Maintenance and Facilities Manager Terry Bill explains.

“Back in the 1980s, the mill was owned by the Spokane Indian Tribe and the bank was foreclosing on them, so the bank contacted Tim Hunt and asked him if he was willing to try to bring it back to life. Tim came down, looked it over and started working there in March of 1988. Within 3-5 years, he bought out the tribe and he and his wife ran it. I was hired on in August of 1988.”

Before long, though, this operation, which began with just 20 employees, according to Rough Mill Manager Dean Churchill, was up to 500 employees.

“As the company grew, we began busting at the seams at the Spokane Industrial Park where we occupied four different buildings,” added Bill. “Some land in Liberty Lake became available and he built this facility.”

Today, they ship cabinets across the West. “Now we sell cabinets in Hawaii, down in California, Denver, Arizona, as far back as North Dakota, up into Canada where we have showrooms in Calgary and Edmonton, some in Alaska. Effectively everything this side of the Missouri River except down in Texas, because there are a lot of cabinet makers down there and by the time you pay the freight to go that far, it’s just not worth it.”

Huntwood Industries’ manufacturing plant is rather impressive, as explained by Terry Bill.

“This facility is pretty diversified. We have the custom shop, the frameless, and the high ends. We don’t do the cookie cutters anymore. We have a state-of-the-art paint facility in-house and our own mixing labs. The Maintenance Department has its own tool-grinding, its own machine shop, our own metal fabrication shop, I’ve got my own diesel shop” (which allows them to do repairs on their own fleet of Sterling delivery trucks).

“We try to do everything in-house, try to be self-sufficient, though there are times when we have to send stuff out, but we try to do the majority here.”

The facility has also received an SCAPCA Clean Air Award. “We run a regenerative thermal oxidizer where we burn all of our paint fumes, so we don’t put out any emissions,” Bill pointed out. “And we have our old bagging systems for dust collection that sucks out about 350,000 cubic feet per minute which is loaded directly into trailers that go out nightly to a mill where they’re recycled for wood.”

Dean Churchill, the Rough Mill Manager, takes care of a variety of jobs, basically everything before paint with white wood. He oversees the rip saws, the cross-cutting saws, the panel-gluing process, the molding, building the face frames, the doors, and the panels. As such, he knows the importance of moisture control.

“The Wagner moisture meters in my area are about 10 years old,” he said. “We run 10-15,000 board feet a day across them. They are key to our operation because if we get a wet piece with a dry piece, it will come apart or swell differently which will warp the panel. We use them to weed out the problems.”

“We run between 7-9% moisture.” Which means they have to wrap the wood before shipping it out to the Midwest or South, where higher humidity could impact the wood.

“We also use Wagner handheld meters to spot-check wood as it comes in,” Churchill added.

Before Wagner Meters’ Apex system was installed on the production line, there were some problems. “I’ve been here 14 years. We had some issues. We had to spot check things by hand.”

The Apex system features an industrially hardened, touchscreen user interface. This LCD design is resistant to moisture, dust and other harsh elements in the demanding environment prevalent in many mills. An easy to navigate menu not only allows for easy set-up and configuration of the system, but also makes the checking and adjustment of sensor calibration from the console convenient, with just a few simple pushes of a button.

A Look at the Future

With Wagner as their partner, Huntwood Industries is humming right along, but there’s always room for improvement. “We’ll probably want to upgrade in the future to get more control [like an Omega system] and be able to monitor the operation from our offices,” said Churchill.

“At the moment things aren’t busy busy, they’re just kind of steady, so we’ll see what the economy does,” Terry Bill concluded.

Wagner Meters is helping Huntwood Industries keep their moisture problems under control. Give us a call at 800-634-9961 to see how we can help you do the same.