Many paths can lead to a job working at a lumber mill, but few people would probably consider working on a commercial fishing boat as something beneficial to their resume.

“I started working on a fishing boat when I was about fourteen,” said Eric Mallery, Boiler/Kiln Lead at Stimson Lumber Company’s Tillamook mill. “After that, I also did some environmental work for a soil and conservation district for five years.”

“My experience on a ship with refrigeration and boilers helped me land a job as a Boiler/Kiln Operator when a friend at Stimson was getting ready to retire,” he explained. “I’ve been at Stimson fourteen years now.” 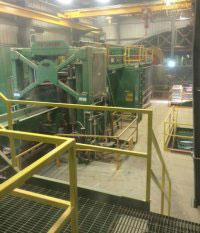 These days he provides training to people running boilers and kilns at other Stimson mills. He’s lead for a crew as well, supervising the lumber drying process, the boiler processes, both day-to-day and long-term, from parts orders to filling in for people on vacation.

In addition, he is an Environmental Coordinator, handling DQ and DPA permitted standards for the boiler, as well as stormwater and emissions, where he’s made sure that Stimson has met all the benchmarks for quite a while.

And there’s a little more family history associated with Stimson. “My grandfather worked for Stimson up in Northern California as a contract logger 50+ years ago.”

“And since my Dad worked for my grandfather part of that time, that makes it three generations of our family working for Stimson,” he added proudly.

When asked whether one of his kids would continue the tradition, he just laughed and said, “Maybe one of the grandkids.”

Innovation is the Watchword 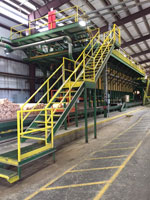 Stimson Lumber has a long, proud history of its own. Begun in Michigan back in 1850, the company built a state-of-the-art mill in Forest Grove, Oregon, in 1929, just as the Great Depression got underway. Unlike many other lumber companies, though, Stimson Lumber retained all of their personnel, never needing to shut down, even temporarily, or lay off workers.

Using innovative ideas, they turned lemons into lemonade following massive wildfires known as the “Tillamook Burn” on their timber stands in the 1930’s and 1940’s by converting burned and green wood that was cracked, stained or of lesser quality into “hardboard.” Their Forest Fiber Products Company, one of the first hardboard operations in the US, began cranking out “sandalwood,” which quickly became the envy of the industry.

Continuing to make forward-thinking moves, Stimson acquired Northwest Petrochemical Company in Anacortes, Washington, in 1962 to manufacture phenol for its hardboard processing needs. Other acquisitions beginning in the 1990’s resulted in Stimson operating divisions in eastern Washington, Oregon, Montana, and Idaho.

Moisture Metering on the Production Line

Although moisture meters are used during Stimson Lumber’s processes, they’re not used at first. “We don’t use moisture meters in the breakdown of the log because we don’t scan ours beforehand,” Mallery explained. “We don’t do an advance sort or wet sort on our lumber.” 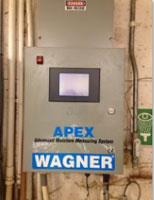 But once the logs enter the line, moisture meters are critical. “We use Wagner Apex meters with the Omega upgrade in line,” said Mallery. “[Wagner] has improved the design over time so that the plates are very sturdy and the scanning capability is quite accurate.”

Wagner Apex meters scan each board roughly 90 times, then that amount is averaged out, which makes it more accurate than using a handheld moisture meter alone.

“The thing about using moisture meters is that the more times you can hit the target, the more consistent your product becomes,” Mallery continued. “You’re seeing the same moisture content at the planer and the wood reacts the same way each time, so you get a more consistent end product.”

“Your standard deviation will drop down, which is nice because you get a tighter curve in the kilns,” he added. “A lot of that is due to the schedule as well, but the moisture meter improves the accuracy of that schedule.”

“What we have found is that we are able to work off scheduled development to produce still better schedules.”

Handhelds have their place in production as well. “We use the handheld Wagner L612 meters to setup the initial calibration and to spot-check the charges, but then we use the inline Wagner meters to make sure we stay on target,” said Mallery. “Values can vary throughout the year and based on which species we’re drying.”

“We also use the L612 to check for cold spots inside the kiln.”

“Wagner Meter’s been a pretty good partner with us on the moisture meters over the years,” added Will Reynolds, the Planer Supervisor.

In addition to receiving feedback from customers and adhering to their requirements, Stimson Lumber follows even more demanding quality standards. “The WWPA [Western Wood Products Association] requirement for KD [Kiln Dried] or KD-HT [Kiln Dried & Heat Treated] standards for structural-grade lumber is followed in order to produce the best lumber that we can,” Mallery explained.

“We have an internal Stimson Quality Plan that WWPA audits twice a year for us as a third party,” said Mike Stockdale, the Sawmill Production Manager. “It has standard quality procedures and quality management reports to adhere to the Quality Management System.”

“WWPA looks through our quality reports to make sure we’re doing what we say we’re going to do,” Stockdale added. “That system is revised at least once a year.”

“For our retail customers we have a premium product we make for them instead of a regular stud grade. The only difference on that is that it is more of an appearance grade stud than a graded stud, which means no ugly knots and smooth cut ends.”

Working with a natural product has its challenges, of course. “Moisture varies quite a bit between hardwood and sapwood within the same log,” said Mallery. “We’re trying to get each board down to the same target of moisture content which, depending on species, is 15% to 15.5%.”

“The kiln guy’s job is to find out what the schedule is that works best with the lumber, producing the best, repeatable results. We’re using the newer techniques to stay on target and produce the best product we can. Then the challenge becomes staying there throughout the year even as lumber changes through the seasons.”

As one might imagine, seasonal changes can have a profound effect on moisture content, too. “In the wintertime, we can go up to 100% moisture content in parts of the log while other spots will come in at 40% moisture content,” Mallery confirmed. “During the summertime, the amount will vary quite a bit, though the numbers are lower – 50% down to as little as 30% or even lower.”

“The trick is to be able to dry wood to the same target, generally around 15%.”

But monitoring moisture is an ongoing job. “Continuous improvement of mill processes has worked well on the kilns, where we’re watching the moisture data very closely,” Mallery explained. “And the manual processes, like dickering, how the lumber is manufactured, and being careful that we’re drying for uniform charges both in and out of the kiln is important as well.”

“We’ve been concentrating on sustainable forestry and improving process efficiency over the past five years,” said Mallery. “Our focus is on a smaller log at Tillamook: Doug fir, spruce, and hemlock. The inland mills use more lodgepole and Idaho white pine.”

And once that lumber is ready to ship out, there are still a couple of steps to ensure that their quality product stays that way. “Our wood is paper-wrapped and sprayed with an anti-fungal that prevents stains of boards after the fact,” said Mallery. “This decreases the likelihood of problems during shipping.”

Looking Towards the Future 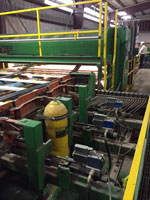 Stimson Lumber continues to look for ways to innovate while producing a quality product more efficiently. They recently purchased new computerized equipment at the Tillamook mill.

“The ‘Twin Project’ was a computerized twin bandsaw upgrade in 2012,” Mallery began. “The bandsaw breaks the log down and optimizes the cut of the log to get the most amount of wood possible out of it quickly by computer-analyzing and rotating the log so that it’s aligned just right before going through the saw.”

“We also have an optimized board edger project that will be going in this fall,” added Stockdale. “And we’re rebuilding the cell walls on our boiler.”

Besides increasing efficiency in the actual milling of lumber, the new equipment will also increase recovery by as much as 10% and is expected to pay for itself within two years’ time.

“We have another upgrade planned for November that will be the next phase downstream from the twin bandsaw which should help us be a little faster, more efficient, and produce better quality wood that is in specification more often,” Mallery added.

In addition to improving the machinery, improving the skills of the workers is also a focus. “We’ve been cross-training our people since last year,” said Mallery. “We’re bringing workers from our inland mills out to Tillamook and sending some from Tillamook inland to get familiar with their operations.”

The hope is that by cross-training personnel, workers not normally exposed to the problems faced by another mill might offer useful suggestions on how to improve operations.

“For each level of skilled labor there’s somebody who is an expert, so Eric is our expert in boiler operations,” Stockdale explained. “He’s been traveling to other facilities and helping them fix up their boilers, what kind of schedules they should run on their kilns, just looking at their processes and helping them improve them. He’s been traveling for about a week and a half every other month over to Idaho or Forest Grove [Oregon] to help them make improvements in their processes.”

But it doesn’t just help those other mills. “Eric’s been looking at other mills to see what improvements we can make here, too,” Stockdale confirmed.

Stimson Lumber’s Tillamook mill has found that Wagner Meters provides them with an edge in producing quality products. If you’ve had similar experiences with Wagner Meters, would you be interested in sharing your story with us? Call us to share your story at 800-634-9961!