Guitar Maker Steve Davis – “All for the Love of Music”

“I was working as a cabinetmaker in Seattle in the early ‘90s when I met a guitar player named Guitar Slim,” recalls custom guitar maker Steve Davis.

“We were working together on a large job in the Seattle area where I was building cabinets and Pat Chase, his real name, was a professional painter. On the side, though, he sang and played the blues along with such legendary blues figures like John Lee Hooker, Albert Collins, and Smoky Wilson, to name a few.

“We became friends and one day he invited me to watch him play. Since I had a little bit too much to drink that night, I bragged that I could build him a better guitar than the one he was using. He said, ‘Okay.’

“Well, the next day he reminded me about the guitar,” says Davis.

“It took me over three years and a ton of mistakes before I finally could make a guitar good enough to give him. It was my first guitar and Pat’s still playing it to this day,” he beams.

Born and raised in Seattle, Davis went to work for Boeing as an airframe mechanic out of high school. When he left Boeing four years later, he worked a variety of jobs, including construction, fence making, and journeyman machine molder.

In 1988, he turned to cabinetmaking, a job he held for 25 years before becoming a luthier, someone who makes and/or repairs string instruments.

Although highly skilled as a cabinetmaker, making guitars didn’t come easy. He never attended a luthier school or worked under the tutelage of a master luthier.

“I just bought books and made a lot of mistakes. I didn’t have anybody to show me the way except what I learned in the books,” he says. 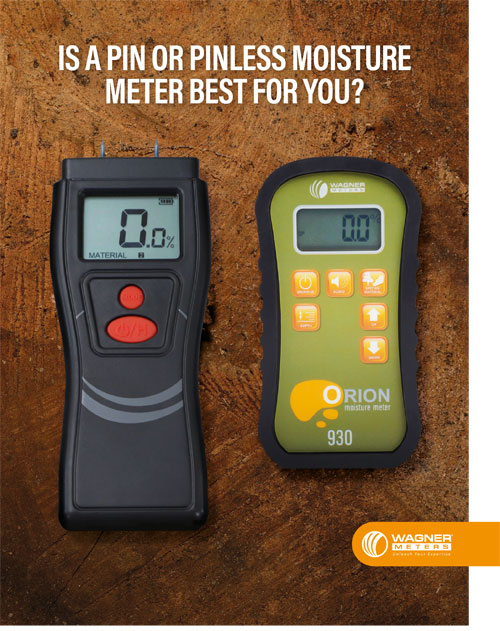 Free Download – Is a Pin or Pinless Moisture Meter Best For You?

Almost 67, and now residing in Albuquerque with his wife, Davis says he’s a retired cabinetmaker. But making masterful instruments that sound as beautiful as they look is not a job, but a labor of love.

Interestingly, since opening his one-man guitar shop in 2005, Davis has never advertised. He doesn’t have to.

“Guitar Slim has so many friends in the music business. They saw his guitar and business just went from there,” he says. 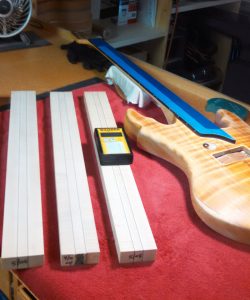 Before crafting a guitar, Davis selects only those woods that meet his standards for appearance and tonal quality. The process involves tone-tapping and checking the moisture content.

“Each piece of wood I use must have the right moisture content – about 8% – to allow for expansion and contraction in various locales. If you send out an instrument that’s not properly dried, it’s going to go bad,” he says.

“I use a Wagner pinless meter to check for moisture because I’ve found it to be the most accurate and it doesn’t put holes in my wood like pin meters do. My wood’s too expensive for that.

“Believe it or not, ever since I started making guitars, my wood moisture meter has been the most important tool in my guitar shop. If I use wood that’s too wet, it leads to a warped neck. That leads to an unhappy musician and an unhappy me. Thanks to my Wagner moisture meter, I’ve never been unhappy,” he declares.

Davis specializes in making semi-hollow electric guitars. He says they aren’t as heavy as the solid bodies and resonate a lot better.

“I used to make solid bodies, but the semi-hollow bodies are preferred when more of the acoustic sound of the guitar is needed with high levels of amplification.”

He favors Honduran mahogany for the body core because of its tonal quality, availability, and lightness. Plus, he likes the way it looks.

Once he makes a core and the hollow parts, he adds a quarter-inch thick layer of Western Figured Maple, chosen for its interesting appearance and beauty, for the bottom and top base. Sometimes he uses walnut for the back plate.

But Davis takes special pains with the guitar neck. A guitar neck affects the way a guitar sounds, plays and feels, and is among the most important elements of the guitar itself. For that reason, he makes his necks almost exclusively out of Eastern Hard Rock Maple because of its strength and tonal quality.

“Since I make electric guitars and basses, which have longer, thinner necks than acoustic guitars, they need to be strong. The stronger the neck, the better the transmission of vibration and sound,” he notes.

Davis builds his guitars around the scale length, which is 34 inches in a bass guitar. This length literally determines the sound of the guitar and its playability.

For the Love of Music

Although officially retired, Davis confides that he continues making guitars because he loves music as much as life.

“It’s a huge part of my life. And when I put my instrument into the hands of these superb players, I feel like I have a part in it. They tell me they’re getting these marvelous sounds because of me.

“Music is very powerful. It’s why I do it. Plus, it’s fun to make something uniquely beautiful.”

Click here to choose the wood moisture meter that’s right for you.