Tile floors have never been noted for being susceptible to moisture problems, but lately, there has been an increase is moisture-related problems in tile flooring installations.

Is the change in performance a result of different materials, different processes, or a new awareness of how moisture conditions in a subfloor can have a long-reaching impact on a floor’s performance?

The answer is…yes. Changes in a variety of elements connected to tile flooring have made it potentially more sensitive to moisture conditions that usually begin in the subfloor.

When ceramic tile made up the bulk of the tile industry, tiles were typically a smaller size (12” by 12” was standard) and were somewhat permeable so they could absorb or allow trace amounts of moisture to pass through. A standard installation would involve larger grout lines, and the tiles would either be applied directly to a subfloor slab or mortar bed or separated from the subfloor by plastic sheeting or asphalt building paper. If there was moisture present, it either had room to escape the from the tiles or was isolated from it.

But that has changed. Tiles are now often significantly larger, with thinner grout line allowances, and are made from low-perm or impermeable materials. Application methods have changed, with thin-set applications or moisture-sensitive adhesives and underlayments commonly in use. Additionally, construction schedules are rigorous in their time restrictions, often not adequately allowing time to ensure the concrete subfloor is completely dry. It all means that tile floors are less forgiving of excess moisture because it has few places to escape and more impact when it can’t. Grout will often show the first clue when a moisture problem exists. 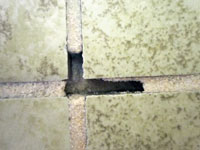 Grout discoloration is often the first sign that there is a moisture problem on a tile floor. It is caused by moisture entering the grout, either from above or below. Grout tends to be more porous than tile and so provides an easier pathway for moisture to travel beyond its bounds.

If the concrete slab below is the source of the excess moisture, that moisture will have worked its way from the bottom to the surface, so discoloration is a sign that the moisture has been present for some time. Moisture can soften the grout, making it more prone to crumbling or damage, or it can result in efflorescence as moisture evaporates away.

Efflorescence is a whitish powdery residue that can appear on grout (or on concrete) over time. It is typically caused by water-soluble minerals in the concrete mixture (or the grout) dissolving into any moisture that is present, which then are transported to the surface during the drying process. As the moisture evaporates from the surface, the minerals are left as a residue that collects on the surface of the grout.

The bad news is that if concrete moisture migration is causing discoloration or efflorescence of the grout on your tile floor, it can be difficult to address adequately. Efflorescence can be removed with acids or solvents but may reappear if the moisture problem is not addressed and corrected. Using acids or strong solvents can also significantly change the appearance of the grout. There are also penetrating sealants that can be applied to slow the rate of evaporation from below. Obviously, any remedy will need correct and careful application.

The good news is that with accurate moisture testing before the tile is laid, a concrete subfloor can be eliminated as a source of problematic moisture. The key is to choose the correct type of concrete moisture test.

There are two generally accepted moisture tests for concrete slabs that will have flooring installed on top of them – calcium chloride (CaCl) testing, and relative humidity (RH), or in situ, testing. However, when considering the lifespan of the floor, RH testing provides the best concrete moisture testing to prevent moisture migration problems in the installed floor. Why? Because only RH testing can predict the final moisture level of the concrete slab over time.

CaCl testing works at the surface of a concrete slab, estimating the amount of moisture in a slab based on the amount of moisture vapor absorbed in a desiccant material sealed on the surface for 72 hours. While there is no scientific basis for this test method, it has been generally accepted for decades as a go/no-go indicator of whether a slab is dry enough to accept a flooring installation.

The difficulty with the CaCl test method is that while it may give an indication of the conditions on the surface of the slab (and even there it has proven problematic in its results), it cannot give any indication of the overall moisture levels in the entire slab. In fact, it has proven to be so problematic that CaCl testing has been specifically disallowed as a test method for lightweight concrete. Moisture migration in a drying slab operates as a cycle that moves excess moisture from the bottom to the surface and continues until the slab has either reached equilibrium with its ambient conditions or until the slab is sealed.

Once the slab is sealed, moisture will continue to move within the slab until it has equilibrated, which may bring the moisture level on the slab’s surface to much higher levels than the CaCl test indicated at the time. 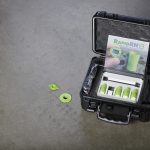 RH testing, like with the Rapid RH®, however, places a sensor within the slab at 40% of the slab depth (for a slab drying from one side), a depth proven through years of testing to indicate what the final level of the sealed slab would be if the slab were sealed at that point in time. Barring the introduction of a new source of moisture (a perforated moisture barrier or a leaking appliance, for example), RH testing allows for the final stage of equilibration that occurs within a concrete slab once the slab is sealed.

That is the moisture level that is critical to the continued success of your tile floor and the grout that holds it together.

For a tile floor that maintains its beauty both within and between the tile, RH testing provides the best possible moisture test method for ensuring a long-lasting and durable finish.

In observance of Independence Day, we will be not be shipping orders Thursday, July 2nd & Friday, July 3rd.
We will resume shipping on Monday, July 6th.