Concrete Vapor Barriers: Everything You Need to Know

What is a concrete vapor barrier?

A concrete vapor barrier is any material that prevents moisture from entering a concrete slab. Vapor barriers are used because while fresh concrete is poured wet, it’s not supposed to stay that way. It needs to dry and then stay dry to avoid flooring problems.

If you’ve ever had a problem with a basement floor (or any concrete floor), you know the kind of damage that too much moisture can cause. Moisture enters concrete in a variety of ways, including via the ground, from humidity in the air, and through leaky plumbing that passes through a slab. Of course, there’s also the moisture that was in the original concrete mixture. 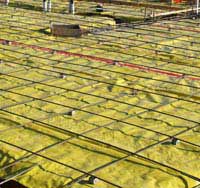 There’s only one-way moisture leaves concrete, though, and that’s via its surface. If you have a concrete floor that’s in continuous contact with a source of moisture, you’re going to have problems. This is why a vapor barrier under concrete is essential. Vapor barriers are a way to keep moisture from getting into the concrete.

The acceptable degree of vapor barrier permeability depends on the application. While a water vapor permeance of less than 0.3 perms is recommended, a higher permeance rate is usually considered acceptable for residential use. However, the vapor barrier under the slab must have a lower degree of permeance than the flooring (or floor covering) above the slab. If it doesn’t, a moisture imbalance could eventually cause a flooring failure. ASTM International gives specific guidelines in ASTM E1745-17 and ASTM E1643 for the use, installation, and inspection of vapor barriers used under concrete slabs.

Why is too much moisture in concrete a problem?

One word: adhesives. Too much moisture in concrete is a problem because it can cause pH changes that destroy adhesives. Here’s what happens.

As moisture makes its way to the surface of a concrete slab, soluble alkalies come along for the ride and raise its surface pH above that of flooring adhesives. This causes the adhesives to breakdown and you end up with flooring failures such as swelling, bulging, or cupping.

Do you need a vapor barrier under a concrete slab?

There’s almost always water underneath a building site. It may not be near the surface, but that doesn’t mean it’s not there. This water can move up through the soil and come into contact with the bottom of a concrete floor via capillary action. Capillary action can be stopped by installing something called a capillary break, a layer of crushed rock that goes between the subgrade and the slab.

Capillary breaks do a good job of stopping water in its liquid state from reaching a slab. However, they can’t stop water in vapor form from reaching and entering a concrete slab. Therefore, there needs to be something underneath the slab that prevents vapor moisture from entering.

You might also need a vapor barrier for liability reasons because most manufacturers of flooring include vapor barriers or retarders in their installation guidelines.

How thick should a plastic vapor barrier be?

According to the Guide to Concrete Floor and Slab Construction published by the American Concrete Institute, a vapor retarder should not be less than 10 mils thick. (A mil is one-thousandth of an inch.) You might need an even thicker barrier though if you’re covering material with sharp angles.

Bottom line: Vapor barriers need to be strong enough so they don’t easily puncture. If they do, moisture will get in and that’s what you’re trying to keep out.

What can I use for a vapor barrier under concrete?

Most vapor barriers are created using polyethylene or polyolefin sheets that are strong enough (at least 10 mils thick) to tolerate the kind of heavy construction activity that goes on over concrete subfloors.

Where should a vapor barrier be installed?

What type of moisture barrier should be used and where it should be installed is a subject of debate. Some think vapor barriers can cause slabs to curl and that simply pouring concrete directly onto a granular base (gravel, crushed rock, etc.) should be enough. Others see vapor barriers as essential and argue that they prevent adhesive failures, retard the growth of mold and mildew, and even prevent certain noxious gasses from entering a building.

However, the current practice recommended by the American Concrete Institute is to apply a heavy grade, non-penetrable vapor barrier (or retarder) with the lowest possible permeance for the application over a layer of granular fill (crushed rock, gravel, etc.). The concrete slab is then poured on top of it.

Note: An earlier practice for vapor barriers involved placing a “blotter” layer between the vapor barrier and the concrete slab. This eventually fell out of use because it was hard to keep the ‘’blotter’’ layer dry.

Generally, you’ll want to use a low-permeance vapor barrier when you need to protect a slab that’s going to be covered by moisture-sensitive materials like adhesives and floor coverings.