Moving Toward a More Eco-Friendly Cement

Second only to water, concrete is the earth’s most highly utilized material. It’s estimated that on a global scale, we use more than 25 billion tons of new concrete annually—more than three tons of concrete per person. As China, India and other countries continue to industrialize, global use of concrete will only grow.

Why does this matter?

Because the manufacturing of cement, concrete’s main ingredient, accounts for 5% of the global carbon dioxide (CO2) emissions attributed to human activity, which may be a factor contributing to global climate change.

Once at the plant, limestone is mixed with water and other materials and then put through a chemical process called “calcination.” This process requires firing the limestone and other ingredients at an extremely high temperature, roughly 2700 degrees Fahrenheit (1400 degrees Celsius). 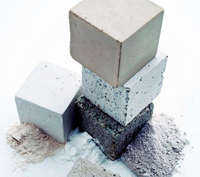 Calcination produces both direct and indirect CO2 emissions. The Cement Sustainability Initiative Report estimates that 60% of the CO2 emissions from the cement plant is directly due to the chemical reaction sparked by the calcination process itself. The other 40% comes from indirect emissions associated with this process—the CO2 released from the fossil fuels needed to fire up the kilns and produce the necessary heat.

Since concrete continues to be a central component in construction projects around the world, the search is on to find a way to make it a more eco-friendly material.

Growing Options to Reduce the Carbon Footprint of Cement

Commercial enterprises and academic institutions alike have been devising creative ways to reduce cement’s carbon footprint. They are looking both to nature and to antiquity for new ideas. Here are some of the most promising:

It is one thing to discover ways of altering cement’s recipe of ingredients so as to reduce the carbon footprint of cement. But it is equally important to ask: Do these changes to the cement favorably impact the characteristics of the resulting concrete?

Thus far, the answers have been surprisingly positive, creating what looks to be a win-win situation. Researchers at businesses and universities have been conducting tests of strength and durability and are finding that their new products yield a concrete that meets or exceeds the strength and durability characteristics of concrete made from the tried-and-true Portland cement.

No matter how quickly the movers and shakers in the cement manufacturing industry shift society toward the use of more eco-friendly cement, we can expect some things to stay the same. The curing process for concrete (that is, the chemical reaction occurring as the cement and water mixture harden, forming the concrete) is still where the durability properties of the concrete are set.

Current research clearly shows that the most reliable concrete moisture test uses an in-situ relative humidity (RH) probe, like those found in the Wagner Meters Rapid RH® kits. Use of other moisture tests could mean an undue risk of a serious flooring failure. Always remember: doing it right the first time not only makes good economic sense, it makes good eco-sense, too!

In observance of Independence Day, we will be not be shipping orders Thursday, July 2nd & Friday, July 3rd.
We will resume shipping on Monday, July 6th.