Don Considine has consulted on some of the largest projects in Australia, including the Sydney Opera House and Rialto Towers. Don has played a major role in promoting in situ relative humidity (RH) testing for concrete in Australia. In recent years the use of in situ RH testing has grown dramatically and it’s now a part of the Australian carpet and carpet tile standards (AS 2455.1 & AS 2455.2) for the first time and was recently included as the only normative moisture test in the resilient flooring Standard (AS 1884).

Wagner Meters (WM) recently spoke with Don (DC) about moisture testing and standards for carpet and carpet tile in Australia. Some of the things we talked about were:

ATTAR Group – Carpet and Tile Expertise Across the Pacific Rim

WM: Who is the ATTAR Group?
DC: ATTAR is an independent specialist provider of compliance, consulting services, laboratory testing, forensic engineering and technical training. ATTAR was established in 1986 and provides customers with expertise and assurance across a wide range of industries. We work all around the country, New Zealand and Asia as well. We provide project management, we develop tender specifications, we conduct defects inspections – pretty much anything to do with carpet, resilient flooring, carpet tile, subfloor preparation, moisture testing, screeds, timber. We’re touching on ceramic tiles now. Most of the manufacturers use us for inspections or moisture testing, or just to understand what’s going on with their products.

Who is Don Considine?

I’ve been in the industry for 40 years. I started with a family business. My parents had a carpet and vinyl shop so I was in installation for 14 years, then I went into carpet manufacturing for 15 years, and then took over IKW Consulting 13 years ago before moving to ATTAR in January 2021. There’s only a handful of consultants in Australia and most of us have been around for a long time. I’m on the Australian standards carpet and carpet tile standards committee and also the resilient flooring standards committee as well as being on the ASTM Resilient Flooring and Textile committees. The carpet and carpet tile standards changed in June 2019, and the resilient standard was released in January 2021.

Major Projects: From Opera to Treasury

WM: What are some of the biggest projects you’ve had in the Canberra, Melbourne area?

DC: I was the flooring consultant on the Sydney Opera House, where I was engaged to write the carpet and installation specifications. In Melbourne, I was the flooring consultant for Rialto Towers for over 12 years, which is the largest commercial building in Australia. My job is to I go in and ascertain what needs to be done – I’ll organize contractors, tender out the works. In Canberra, I’ve done the R.G. Casey Building, which is 36,000 m² of carpet tile. I wrote the original specification for the job to tender out, and then they engaged me to project manage the job and go in and do defects at the end of the job. That job actually extended for a long time because there was an issue with the carpet tiles, and they had to remake them. Then there’s the Defence Plaza in Melbourne, Treasury Building in Canberra, Regis Age Care…

WM: What are the most common tests used down under?

The resilient Standards committee removed the hood test from the Standard with the withdrawal of ASTM F2420 and replaced it with ASTM F1869 The Anhydrous Calcium Chloride Test, however, this is noted in the Standard as a secondary test where the in-situ probe test cannot be done, due to in-floor heating in the slab, cabling in the floor, etc.

So the current carpet/carpet tile standards has hood testing and in situ RH testing. Either one is allowed. We don’t mention which standard they have to test to. That was a decision made by the majority of the committee because some of the biggest manufacturers wanted the hood test as their predominant test, and there are times when you can’t do in situ RH testing, like with hydronic heating and cabling in the floor.

With the changes to the standard previously where testing went from having to be done over 72 hours to 24 hours, the in-situ RH test is a much faster test than the hood test so I really can’t see many hood or Calcium Chloride tests being done.

I have been using the Wagner equipment for over 10-years now and I only use the Wagner equipment for in-situ probe concrete moisture testing. For me, they may cost more initially because the sensors are not reusable however I make up the cost in the time it takes me to take a reading on site after 24 hours, because taking the readings take only 5-10 seconds. The new blue tooth readers that sync to your mobile phone now make that process even quicker and easier. Plus the fact using the Wagner sensors takes out the requirement for calibration which makes it easier for me, especially as getting RH sensors calibrated in Australia is very expensive. I just find the Wagner easier to use and more robust. And look, the support is great. Jason will always come back to me normally within a day, or if he’s away, a couple of days.

In Situ RH Testing in Australia 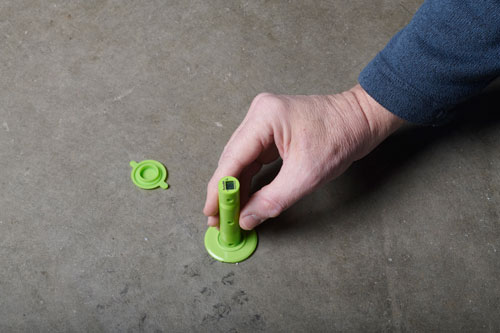 WM: How much does the Australian flooring industry utilize in situ RH testing?

DC: It did take a while but now in-situ probe testing in accordance with ASTM F2170 would be by far the most widely used moisture test method in Australia, however the biggest difficulty here is still getting people to test although they are getting much better and more diligent with their testing. In the last ten years, I might’ve done four or five hundred complaints that are related to moisture. From those, there would be a handful that actually either tested or tested properly. So our biggest push is trying to get people to understand why you need to moisture test. It’s an insurance policy, that’s what I tell everyone. Yeah, the slab might be dry now, but if something happens on-site and the slab is wet in 6 months’ time, 12 months’ time, two years’ time, and you don’t have that insurance policy in place telling you that the slab was dry when you laid the flooring, well you’re going to be held accountable. It only takes one job for 20, 30, 100 thousand dollars to sink a business and potentially bankrupt them. I know people hate doing it, it takes a bit of time, but it’s just an insurance policy. And now that the F2170 standard is 24 hours and not 72, there’s really no reason not to do it.

WM: Are there any situations that favor in situ RH testing above the others?

DC: We went through this with resilient flooring Standard recently and the resilient committee agreed that the in situ RH test is the only real quantitative test in our opinion so it is the only normative test in the AS 1884 Standard. The in-situ probe test is more protected against the environment, it just seems to be a more robust test, which is why it is the only normative test in the resilient Standard and the surface test is a secondary test only to be undertaken when you can’t do an in-situ probe test. The issue with any surface testing – be it hood or calcium chloride – is it all relies on surface preparation. They’re sitting on top of the slab so when you’re in a commercial building they can get damaged, they can get destroyed. So contractors have been using in situ testing more and more over the last four or 5 years. But it wasn’t popular to start with because it was different, whereas now it’s definitely the go-to method in Australia for floor coverings.

Advice for US Flooring Professionals

WM: Do you have any advice for U.S. flooring professionals?

DC: Don’t think moisture testing is a chore. It’s an insurance policy. It’s there to protect you. Yes, the builders hate it because it could mean a potential variation of tens or hundreds of thousands of dollars. But if you’re a flooring contractor it’s your business and you want to protect it. So by moisture testing it and photographing it, it’s protecting you.

DC: No worries. Thanks very much.