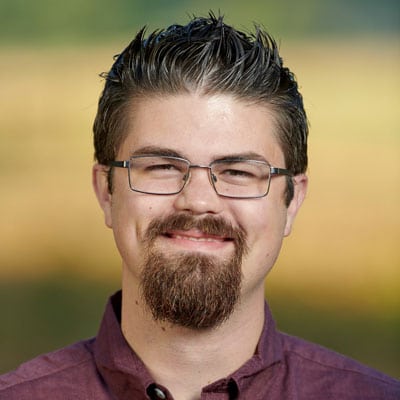 Eric Wagner, vice president of Wagner Meters since 2018, represents the third generation of Wagners for the company founded by his grandfather, Delmer Wagner. Eric has been working at the company since he was in middle school. At first, he learned about the guts of each product while helping ‌in manufacturing. During high school and college, where he studied engineering, Eric worked in a variety of departments. In addition to manufacturing, he helped in the engineering department, including in research and development where the challenge of finding solutions for product development invigorated Eric.

He remains fueled by his desire to innovate, not only in product development but in marketing too. Eric co-created the marketing department in 2011, when he joined Wagner Meters full-time. He saw that even innovative, top-quality products need a strong marketing team supporting them. Eric had taught himself web design and various scripting languages. In marketing, he could deploy his knowledge about both moisture meters and web design.

In 2012, Eric became the head of the marketing department. He directed Wagner Meters’ transition into digital marketing and oversaw the successful launches of the current generation of handheld moisture meters and other new products. Under Eric’s leadership, the marketing arm of the company expanded to become a separate firm, i7 Marketing, that now also provides digital marketing services to select clients and small companies in boutique industries that offer premium products.

Eric enjoys talking with Wagner’s customers and listening to their issues and preferences. He uses the customer feedback to figure out what new features customers will value most. Eric gets a thrill every time the company lands on a viable solution to meet customers’ needs. He remains active with engineering and product development and is on the inventor list for three Wagner Meters’ patents (dated 2016, 2017, and 2020).

As vice president, Eric remains committed to his grandfather’s and father’s guiding principles for Wagner Meters:

First, that the company brings the best quality, premium products to market, engineered to work together to help people improve their craft and their business.
Second, that Wagner Meters goes above and beyond to communicate with and help teach customers and others in the industry. The goal is to learn from them and be an unmatched resource for them.

Eric and his wife Kim have two young children. He’s an active volunteer in the community and a leader at his church. Before having kids, he was a hobbyist woodworker, building larger things like furniture as well as smaller crafts. Now he spends as much family time as he can enjoying the outdoors. He and his family have a mini-farm with a fairly decent garden. Eric also makes it a priority to go on at least one whitewater rafting trip each year with friends along the Rogue River. Plus he is always looking for a new hike to explore. Eric is continually exploring and learning new things, including becoming a licensed drone pilot.

We use cookies on our website to give you the most relevant experience by remembering your preferences and repeat visits. By clicking “Accept”, you consent to the use of ALL the cookies. However you may visit Cookie Settings to provide a controlled consent.
Cookie settingsACCEPT
Manage consent

This website uses cookies to improve your experience while you navigate through the website. Out of these cookies, the cookies that are categorized as necessary are stored on your browser as they are essential for the working of basic functionalities of the website. We also use third-party cookies that help us analyze and understand how you use this website. These cookies will be stored in your browser only with your consent. You also have the option to opt-out of these cookies. But opting out of some of these cookies may have an effect on your browsing experience.
Necessary Always Enabled
Necessary cookies are absolutely essential for the website to function properly. These cookies ensure basic functionalities and security features of the website, anonymously.
Functional
Functional cookies help to perform certain functionalities like sharing the content of the website on social media platforms, collect feedbacks, and other third-party features.
Performance
Performance cookies are used to understand and analyze the key performance indexes of the website which helps in delivering a better user experience for the visitors.
Analytics
Analytical cookies are used to understand how visitors interact with the website. These cookies help provide information on metrics the number of visitors, bounce rate, traffic source, etc.
Advertisement
Advertisement cookies are used to provide visitors with relevant ads and marketing campaigns. These cookies track visitors across websites and collect information to provide customized ads.
Others
Other uncategorized cookies are those that are being analyzed and have not been classified into a category as yet.
Save & Accept