Just recently, Larry Loffer, Wagner’s Sr. Industrial Systems Technician, received a call from Gerry Lane up in the far reaches of the forests on the Olympic Peninsula in northwest Washington State. He said that he had a little problem with his in-line moisture measurement system, and asked if Wagner could help him get a few parts. Of course, Larry was happy to oblige but as he listened intently to what Gerry was saying, he became perplexed because the parts that he was describing did not sound familiar to him at all, even though Larry had been with Wagner for 28 years. How strange this was!

Larry asked Gerry, “Do you know the model number of this Wagner in-line system?” and he replied, “Oh, I think it is a 667 but I will take another look.”

Larry was not sure that he heard him correctly and asked him to repeat what he said. Ed confirmed that it was indeed a Model 667, first implemented in the mills back in June 1967. He exclaimed, “I know that we have always designed very rugged meters and in-line systems for sawmills and I am eager to hear the rest of this very interesting story.”

Here is what Gerry told us…

Allen Logging Co. opened its doors for business in 1956 with Lloyd Allen at the helm, who had owned a logging company in the northwest of Forks since 1937. Gerry told us that he is Lloyd’s nephew and he has been with the family business for over 42 years now. To say that his uncle was dedicated to the mill was an understatement since he was working up until 6 months before his death in July 2012, having not quite reached his 95th birthday.

Gerry went on to say, “We purchased our initial used double track kilns in 1977, rebuilt them and started drying wood for the first time. Those kilns had the old conventional Foxboro controls on them.

“Shortly after that, we purchased the Wagner Model 667 In-Line Moisture Measurement System and who would have guessed that this equipment would still be chugging along 36 years later?” 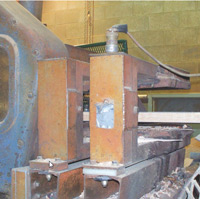 “With this system, we measure our boards from end-to-end at the outfeed of our wood planer and mark wets with a disappearing ink.” He continues, “We did develop a minor maintenance issue. You see, for years at the outfeed of our wood planer, after taking moisture measurements with the 667, the wood went through a spray box, was treated with a pentachlorophenol-water diluted application which also had a moisture inhibitor and mold retardant. Over time the sensor was getting wet as a result of the carryback from the sprayer and it began to penetrate the coils so we just dried out the sensor a bit and we were back in business. Years later, we had the same issue when spraying the lumber with a cherry-toned product which was an industry practice at the time, and again had to deal with the same spray back situation.”

Gerry laughs and admits, “When I called Larry at Wagner, I did not remember having these moisture issues with the sensor assembly because the mill had not used any applications on the wood for over 10 years. Then recently we ran some green 4x4s through the planer and once again developed moisture in the sensing unit. I really thought that this workhorse was on its last legs but after speaking with Larry, we ran dry boards through the planer for several days and lo and behold, the problem disappeared.”

Still laughing, he mused that if you took the 667 up in an airplane and at ten thousand feet dropped it out, picked up the thing and put it back online, that it would probably work. “It’s built really tough.” 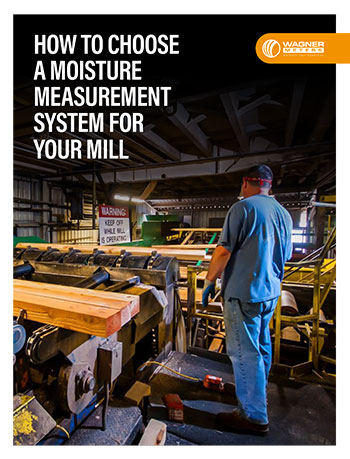 Going back in time again, in the 1980s the mill secured three-pocket (package) kilns and contacted Wagner for help with in-kiln moisture measurement equipment for these kilns.

It was then that Allen Logging added the model 778 In-Kiln Moisture Measurement System along with the L612 Moisture Meter and companion L712 Stack Probe for making hot checks.

“The 778 was virtually maintenance free and every so often through the years we sent the L612 handheld moisture meter back to Wagner for a tune-up.”

“The few times we had to get in touch with Wagner,” says Gerry, “We were never told ‘Well that is old, it’s obsolete, don’t call us anymore.’ I have had experience with companies selling systems and then when we have gone back to them for help just a handful of years later, we were told that they no longer support the system. Why would you want to ever buy anything else from someone that does that?” 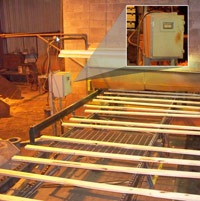 Wagner technician Larry often repeats to customers like Gerry that “No matter how old the system or moisture meter is, if we can get the parts to fix any unit we certainly will, whether a customer bought a $500 moisture meter or spent many thousands of dollars on our industrial systems.”

On the subject of equipment longevity, Wagner’s Sales Manager Ron Smith weighs in saying, “It is one thing to be able to continuously repair a mechanical piece of equipment over time; you can do wonders with welding, and bearings and chains and so on are pretty much available, but electronic components are a different game. The Wagner systems that Gerry speaks about are several decades old with old electronic components. Electronics change quickly; mechanical, not necessarily.”

Finally, Gerry tells us that Lloyd’s three daughters are dedicated to the continued success of their family business. Allen Logging now cranks out over 15 million board feet of 2×4 and 2×6 studs a year, as well as wood chips for pulp mills. He goes on to say, “In all the years we have been in business, our customers have rarely complained to us about any moisture issues with their shipments and we have to thank Wagner for selling us reliable and very verifiable moisture measurement equipment that just seems to last forever.”