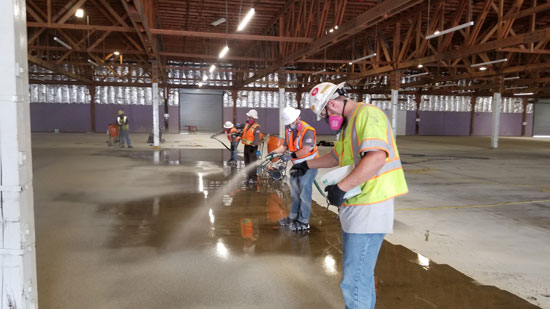 The recent refurbishing of the U.S. Army’s Great Basin warehouses has involved several steps, including the broadcasting of silica sand.

Sprawled across 36,000 acres of arid Great Basin desert in a remote section of California sits one of the U.S. Army’s largest maintenance facilities, the Sierra Army Depot. It’s here, outside the town of Herlong, that the Army repairs and retrogrades everything from radios and Kevlar vests to tanks and Humvees, essentially making them new again for reuse by the military.

Built in 1942, the Depot’s multiple maintenance warehouses show significant signs of aging, including their 90,000 square-foot concrete floors. Many of the slabs’ control joints are widely separated every 20 feet in both directions causing trip hazards and slowing down forklift traffic. Meanwhile, floating concrete slabs have heaved and separated, causing additional safety hazards.

This was the situation in 2012 when the Army hired Concrete Basics, a Palm Springs, Calif. based company, to refurbish and recoat the concrete floors.

“We’ve been working on this project on and off since 2012 and have completed several buildings with potentially several more to go,” says Jeff Chambers, the Company’s President.

“It’s taking a long time to complete because the Army has some downtime every year and the work is doled out based on available budgetary funds.

Because of the size of each warehouse and the extensive repairs needed, Chambers says it takes his crews about three months work to completely redo each building’s flooring. If the Army awards additional buildings in need of repair to Concrete Basics, Chambers estimates it may take another couple of years before completion. 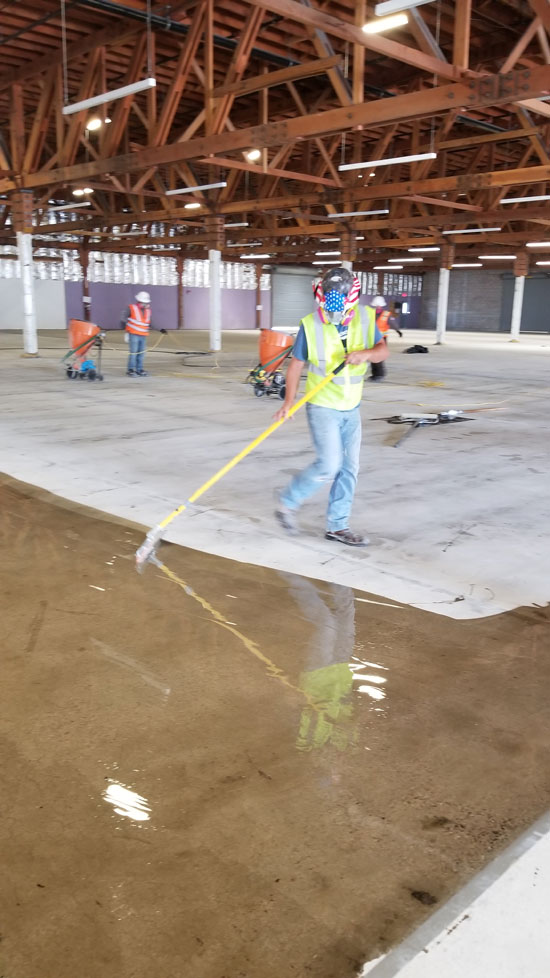 Application of epoxy resin is a key aspect of the work by Concrete Basics to refurbish concrete floors at the Sierra Army Depot.

“These floors have never been maintained and they got beat up pretty bad over the years. The Army runs a lot of heavy 20,000-pound forklifts with containers and heavy loads over these floors all day long. They’ve just been abused,” Chambers says.

Take, for instance, the Depot’s carpool buildings which are reserved for vehicles. They contain anything from 2-wheel drive pickup trucks to 20,000-ton forklifts.

The floors in these buildings have a set of railroad tracks running through them, which the Army once used to deliver goods and services. Hence, the floors are horribly cracked and contaminated with petroleum, hydraulic fluids, and other compounds.

“We got to decontaminate the floor’s grime before we even begin,” he adds.

Chambers says his biggest jobsite challenge, however, is the weather. Since the depot was built in a desert next to the eastern Sierra Nevada mountains, it can get 104 degrees by midday. At night, the temperature can drop below 50 degrees. So it’s common to have at least 60-degree temperature changes in a 24-hour period.

There’s also the chance of sudden thunderstorms, snow blizzards, wind, and wind-driven rain – all of which impact the company’s use of coatings and epoxy resins.

“A lot of epoxy resins rely on temperature in order to work properly. We’re using a 2-part Sika product called Sikadur® 22. We have cold weather in the morning, so it gets thick like syrup. So that’s a challenge we deal with every morning. But as the temperature warms up, it becomes easier to mix, pour, and install,” notes Chambers.

Although the work is done indoors, the aging warehouses don’t completely shut out the drastic weather changes and their effect on the epoxy resins. So Chambers says it’s impossible to acclimate the buildings.

Making matters worse, the Army’s ongoing efforts to remove old asbestos siding from its buildings also affects the company’s epoxy installation. For instance, during the cooler months, interior temperatures can drop 40° in only a couple of hours. 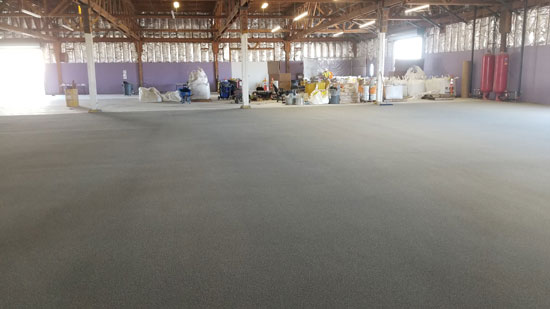 After silica sand has been broadcast, it gets swept evenly in preparation for next steps in the refurbishing of the concrete floors.

Besides concerns with the weather and abused floors, Chambers also is highly concerned about concrete moisture. He first learned about the effects of moisture when he did technical sales for Crossfield Products back in the mid-90s.

“I sat next to Rick Meyer, their lead chemist of 37 years. Every day he discussed moisture vapor transmission issues over the phone with most of Crossfield’s largest Factory Trained Applicators. He always had them on speaker so I could listen and learn. He was invaluable then, and I think about those conversations still today when I’m evaluating a floor,” he says.

Chambers thinks the biggest challenge today is getting more people to understand what moisture vapor is, what causes it, and its negative impact on floors and flooring materials such as epoxies and coatings.

Early on, he tested for moisture using the calcium chloride test. More recently, he switched to in situ relative humidity (RH) testing using Rapid RH® by Wagner Meters. It is one of several available RH test kits.

“When I first learned of the in situ RH testing method, I questioned its validity. After lots of researching and talking with many of my colleagues, I finally decided to give it a try. That was several years ago.

“The RH test has since become my go-to method for measuring moisture,” he remarks.

“It’s a trusted, widely accepted method, and gives me the most accurate, reliable result. Besides, anyone doing a dome test, a plastic sheeting test, or any other method, doesn’t have any clout or legal significance like they do with the RH test method.

“From a legal standpoint, we’ve never had any challenges with the RH test. It carries a lot of legal clout,” he adds. That’s because the RH test method is backed by scientific studies over the years that show the importance of testing the moisture condition deep down in the concrete and not just at the surface, as is done with other test methods.

Chambers chose the Rapid RH system because he does a lot of moisture testing each year. He has found that the simplicity and ease-of-use of this test system saves him money each time he uses it. He explains, “Obviously, this is a prevailing wage job. Our basic labor rate up here is $47/hour. So time is definitely a concern since it equates to money,” he says.

Chambers also believes anybody given a five or ten-minute quick overview of how it works can use it with no problem. 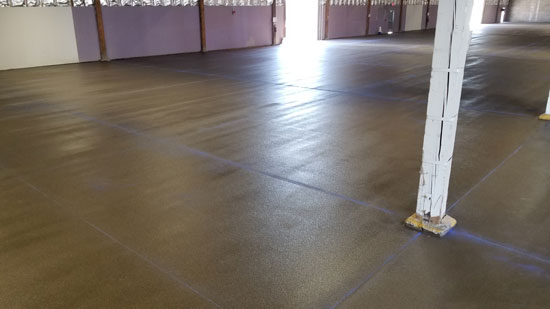 Concrete Basics had to address significant challenges with weather during application of the sealant, prior to the final saw cutting of the concrete floor’s control joints.

No matter the job – a hospital floor, shop floor, or an abused Army depot warehouse floor – moisture is something Chambers always take very seriously. It’s why he carries an in situ RH kit in his truck all the time as do both of his project managers.

“I’ve seen too many flooring failures in my 25 years in this business and moisture’s behind most of them. But we can avoid those failures by using RH testing. It’s why we test every floor we do,” he explains.

About the author: Joseph Lilli is an award-winning writer with a diverse portfolio of more than 300 published articles. He likes to write about innovative companies both large and small, and has been writing about moisture measurement solutions in the construction industry for several years.